It's all gonna be okay


Ministry is a calling of great joy. I am blessed to be able to fulfill my calling in a way that allows me to make a career out of it. Those called in other countries aren't always so lucky. While ministry fills my soul and connects me to God, there have been some really heartbreaking parts of the job as well.

You might think that walking with people through death, divorce, or illness would be the worst part but in many of those cases I've considered it an honor to do life with others in the hard times.

The worst parts were when I had death or painful circumstances that I needed to process yet I still needed to be an inspiring pastor during that time. The first was when a colleague, Allan, died one week before we were to launch a church together. He had become a very close friend and his loss in my life was felt personally as well as professionally. During that time I felt myself enter into an emotional and mental state that was unfamiliar. I soon realized that this was depression. I got the help I needed and in time I was healed. In that process my friendships grew stronger. My faith deepened. And I became a better pastor. I don't wish anyone to have to deal with death unexpectedly but I'm able to look back at that time and see God at work.

The second painful circumstance is more recent. This year our church had our lead pastor suspended and later he surrendered his credentials under charges. We had an interim pastor for a few months and got a new lead pastor this June. There wasn't a context for processing this type of scenario. I had a lot of emotions through this and the congregation had a lot of emotions and they didn't always match up. There was a lot of what felt like ambiguity from our conference (mostly due to the confidential and sensitive nature of the situation). Most of the time during those four months, I was fine. I was able to lead the best way I knew how and I developed relationships with some members that I'll treasure forever.

But the day our new lead pastor started, I experienced something that truly surprised me. On one hand I was excited and relieved to be starting a new chapter. But on his first Sunday I began to feel lethargic and had to talk myself into every move that I made. All I kept thinking in my head was, "Here we go again." It felt very similar to the time after Allan died - and that hurt. This lead pastor was my sixth in four years. One was due to a retirement. One was due to my moving. Another was due to a conference move. And then the current scenario. It hit me that day that I'd had an overload of change and I needed time to let my body catch up. I sat down that afternoon to rest and felt my old "friend" depression just behind my eyes. I wasn't depressed. I just knew I was close to it. And I was scared.

I immediately put together a plan (its what I do) to exercise, sleep well, eat right, and stop drinking. It worked and I no longer feel the pull into darkness that was there that day.

But here's where God is good. On that Sunday when I thought I might slip back into something dark and lonely, I got a text message.  It was from Allan's daughter, Hannah. The Christmas before Allan died, he gave me a Georgia Tech decorative bowl as a present. The kind you put fruit in on your kitchen counter or fill with something great at parties. I used it off and on for years and thought of him each time. Last year Hannah graduated from Georgia Tech. She was Ms. Georgia Tech her senior year and the Ramblin Wreck driver as well (only the 4th female to do so). I asked her to come by my office after she graduated and before she left for her job in Seattle. You can probably guess I gave her the bowl. Allan would've been SO proud of her and I felt like it was definitely more important that she have it to remember him even in a part of her life where he couldn't be present.

That particular Sunday she sent me a simple text. A picture of the bowl with food for a small gathering she was about to have. It meant the world to me. A few hours later I got a text from Allan's other daughter, Abby. Abby is currently pursuing her calling in graduate school in DC. Allan would love to have some of the conversations with her that I've had over the past few years. Her passion for God is truly remarkable. She texted saying that she would be in town that week and wanted to have lunch. 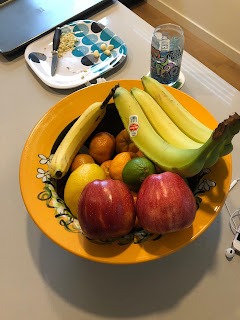 God sends reminders of good news in funny ways. Who knew that two simple text messages would be the reminder I needed to know that its all gonna be okay.

No matter what we go through in life, it truly will be okay. There's nothing too big for God. Its really hard to trust this when we are going through trying times but if we look really hard we might just find reminders that we can push through it. And when it finally is okay, may we be a reminder to others to hold strong.

Innovation in Faith Everything we used to de is being reimagined . How we do meetings. How we grocery shop. How we do school. And how we cre... 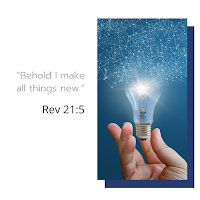