Can I pass for your sister? 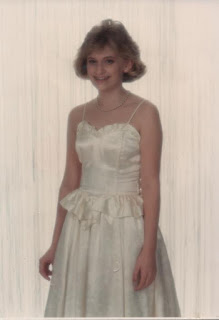 When I first started in youth ministry, I was often asked where the Youth Pastor was.  I specifically remember taking two sixth graders to a service project and being mistaken for one of them.

It happened.  It was embarrassing at the time but something I replay in my head now when I see a new wrinkle.

So when I started at Hopewell and began to visit some of the kids for lunch at school, I had one youth say that people would probably think that I was her mom because we both had blond hair.  As much as I would like to have her gene pool (she is slim, beautiful and talented), I really would have preferred to be mistaken for her older sister than her mom.  So i started telling everyone who asked that I was her sister.  For the most part people would be polite to me and realize I was crazy when this youth would roll her eye and say very loudly, "NO SHE'S MY YOUTH PASTOR!"  After that it became a marketing tool.  It was easier to spread the word when youth made and outburst about who I was thereby giving me an in to say something youth group related without crossing the scary church/state boundary that scares so many.

But the moment that thrilled me the most was when I was at the middle school with a different youth and a 7th grader came up to her and asked if I was her sister.  It happened and now I have something else to replay in my head (of course I did suggest that this youth's friend may need a trip to the eye doctor).

I don't think I look anything like my picture from 8th grade above but I do think I have kept a portion of my young heart in tact so that I'm still fun and faithful (even if it is only in my mind sometimes).

Psalm 103:5He fills my life with good things. My youth is renewed like the eagle’s!

Email ThisBlogThis!Share to TwitterShare to FacebookShare to Pinterest
Labels: #youthmin

How Racism is Built Into Our Structures I thought I could spot racism when I saw it. I've seen the hurt inflicted upon a friend when the...