For everything that was written in the past was written to teach us, so that through the endurance taught in the Scriptures and the encouragement they provide we might have hope.

May the God who gives endurance and encouragement give you the same attitude of mind toward each other that Christ Jesus had, so that with one mind and one voice you may glorify the God and Father of our Lord Jesus Christ.

I have a confession to make. There are days when I don’t want to go to church. I know that all of you think I spend hours reading my Bible, praying, and feeding the poor but I’ll admit now that there are days when the Bible doesn’t get opened, my only prayer is saying, “Lord help me!”, and I’m lucky if my kids get fed.

We all have those days. Those days when we really don’t want to do anything except stalk others on Facebook to make sure that nothing exciting is going on.

On those days, my attitude is the only thing that can turn me around. When I wake up and groan, “O Lord it’s morning!” then I rarely have a good start. When I think, “God – I’m not ready for this day but I know that with you I’ve got this!” then I usually am able to see the work of God all around me.

Our attitudes toward others, should be the same attitude that Jesus had. Love one another. I know that there are people in your life that you might find unlovable, but for some reason God loves them too. And if you change your attitude and look close enough, you might just find out why.

So turn your attitude around (or upward and outward), and see the amazing things that God has in store for all of us!

Isaiah 40:31
but those who hope in the LORD will renew their strength. They will soar on wings like eagles; they will run and not grow weary, they will walk and not be faint.

I was not born a runner. Okay well for that matter none of us are. But even after I learned to run, I held to the strict belief that running was for those who were chased or those who were fleeing danger (which could possibly be the same thing at times). I've also held to the belief that clowns are creepy and despite others' attempts to dissuade me, I've held firm.

But the running bug bit me in my 20's and keeps coming back to bite me. I heard runners talk about the "running high" and I was all in. I started by signing up for a 5k. I'd never run before in my life and this was my motivation: finish without dying. I succeeded. Slowly. From there I got faster and the threat of death from 3+ miles was a distant memory.

Over the years, I've gotten on and off the running wagon only to be suckered into another race and thankful in the end that it was over - and thankful for the experience.

I am again at a crossroads of another race. On November 10, I will run my first half-marathon. Three months ago I was barely in shape to run three miles. In three weeks I'll be running 13.1. Its that point one that will really hurt but I know it will all be worth it.

Why will this gruesomely long distance be worth it? Because of Rob. I never knew Rob, but a year ago I met his mother, Sharon Collins. She is a strong, amazing woman that I know God meant for me to meet. There have been too many God-incidences for our relationship to be an accident.

Sharon's son 1LT Robert Wilson Collins died in combat on April 7, 2010 in Iraq. He was 24. Sharon, our church, and Rob's friends in Tyrone suffered a great shock. You need not have known someone to know how great they were and how great they would have become. Rob's life was a testimony to others and I've seen the impact that his short life had.

If you want to join me on this journey feel free to laugh.. I mean cheer for me as I cross the finish line.  You may also make a donation to the scholarship in his memory. The details are below. 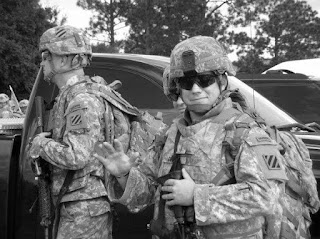 Donations to the scholarship may be made out by check and sent to:

(or you can give these to me [Shannon] and I'll get them to the right place)
Company Overview
Robert Wilson Collins was raised in Tyrone, Georgia where he attended Tyrone Elementary School, Flat Rock Middle School, and Sandy Creek High School. Before graduating in 2004, Robert was a member of the varsity football team, swim team, golf team, and the freshman baseball team. His classmates nominated him class president in 10th and 11th Grade, homecoming king in 2004, and named him “Most Memor
able” of the class. Some of his many academic achievements include being a Junior Marshall, a Senior All-Star, and a member of the National Honor Society.

After high school Robert attended the United States Military Academy at West Point where he graduated in 2008. 1LT Collins was serving as a Platoon Leader in B Company, 1-64 Armor Battalion, 2nd Brigade Combat Team, 3rd Infantry Division when his platoon was deployed to Iraq to support Operation Iraqi Freedom in the Fall of 2009. On April 7, 2010, Robert and PFC William A. Blount (21, Petal, MS) were killed near Mosul, Iraq. At the age of 24, Robert was the first member of the USMA Class of 2008 to die in combat.