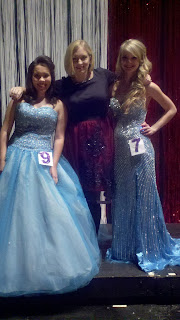 Tonight's mission: go to a place where I have to wear formal attire.

I was kind of at a loss on this one.  I'm not one to dress up often and he-who-shall-not-be-named-in-sermons-or-blogs' idea of dressing up is wearing jeans and a shirt that isn't a t-shirt or sweat shirt.

Either I was going to have to drag my date kicking and screaming or book a cruise really fast.  Neither was really an option.


But thanks to my amazing friend Lynda Owens I was able to pull this one off.  She was a major player in the Miss Sandy Creek pageant this year.  I had already planned on attending since two beautiful girls from our youth group were entered.


This was no "toddlers and tiaras" pageant.  These were real girls who were just a beautiful on the inside as they were on the outside.  It was fun and glamorous. I even got to lace someone's built in corset.  Who knew dresses were still like that?


So thanks again for the opportunity Lynda!  I thoroughly enjoyed myself.

New International Version (NIV)
2 when they see the purity and reverence of your lives. 3 Your beauty should not come from outward adornment, such as elaborate hairstyles and the wearing of gold jewelry or fine clothes. 4 Rather, it should be that of your inner self, the unfading beauty of a gentle and quiet spirit, which is of great worth in God’s sight.

Email ThisBlogThis!Share to TwitterShare to FacebookShare to Pinterest
Labels: #birthday