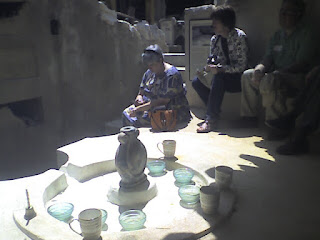 I'm proud of myself today. I was able to get out of bed and my cold medicine drug induced zombie-like coma in order to spend a fulfilling day with other clergy from my conference learning about ancient Jerusalem. While I felt like I've had one foot in the grave this past week, I found irony in the thought that I was sitting in a replica of Roman catacombs where early Christians met. There were even fake bones sticking out of ossuaries. (note picture above from said setting)

Then later on at a ball game I talked with a mom who wants to tour Oakland Cemetery in Atlanta. I think she thought that it was morbid but I'm one of those weirdos that likes to tour historic cemeteries. She even told me the story of one person who proposed in a cemetery because it was such a beautiful setting. My thought was - of course - it is til death do us part so why not start the contract in a cemetery?

I think I've come a long way with my thoughts on death. Just a few years ago I lost a great friend and the thought of the places and conversations I had today would have put me in a spiritual hurricane. But today I was at such peace talking about death. As one of my favorite theologians once said "To the trained mind, death is just the next great adventure." (okay it was Albus Dumbledore who said that and don't take me too seriously)

So I guess its time to finish writing my book. WILL SOMEBODY PLEASE KEEP NAGGING ME TO DO THIS?????????? I'm ready to wrap it up. I've healed enough to tie a bow on it and call it done and even write the happily ever after ending that ALL good books have. I just need to sit down and do it. Tomorrow. Definitely tomorrow.

finish your book! see you Thursday.