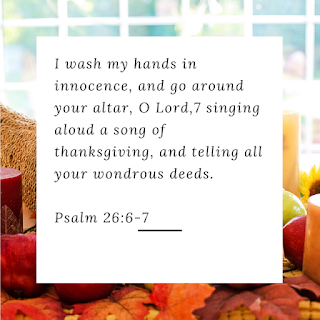 Our family apparently has a Thanksgiving curse upon us. I have no idea when it really started or who wished it upon us but we definitely have one. The problem isn't that our Thanksgivings are so horribly bad, but that one of us (or a few of us) always get seriously ill during the holiday. Not gravely ill. And more than sick. But ill enough to require either a trip to the hospital or many doctors visits or even once the use of an airline "baggie".

Well this year has been no exception. The curse struck early in our house this year. I guess I'm thankful that it didn't hit while we were on the road but I am a bit peeved that it canceled our trip altogether. This year the victim was my husband - who NEVER gets sick but has been hit twice by the curse. One year it was due to a certain cousins clams casino. This year he got the Canadian crud (we're calling it this as he just returned from Canada). It was bad enough for him to cancel our trip and go to the doctor three times!

I have been hit twice by the curse as well. I am the famous one to use the "baggie" and last year I had a horrible cold/sinus infection along with morning sickness. Never a good combo. The worst part of that was we weren't telling people I was expecting yet so I just seemed like a hormonal weenie.

So even though I'm spared the car ride to NY, I will miss seeing everyone and the cool side trips we had planned along the way. Instead I'm grateful for having family here that I can celebrate with and that I didn't get the curse yet (knock on wood).

So I guess its true, God can turn any curse into a blessing if he wants to. He's even spared my husband's life. Not from the crud (which is painful but not fatal) but from me as he's been home for one full week "working" and I haven't killed him yet!

Are you sure you're not just a hormonal weenie ; )

There's a reason why we don't travel at the holidays (and no it's not because we've been banned from family gatherings because of my smart mouth) - I hate being sick, and this is that time of year and everyone wants to kiss you. Eeww. I won't be missing the Canadian crud, sorry the germs from up north ruined your trip.

I'm hormonal but NOT a weenie!